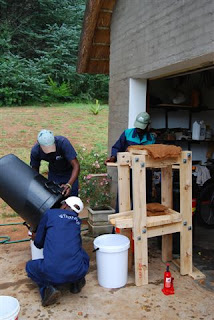 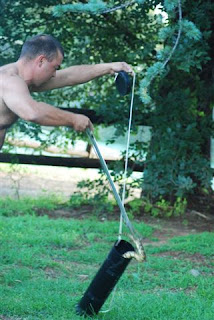 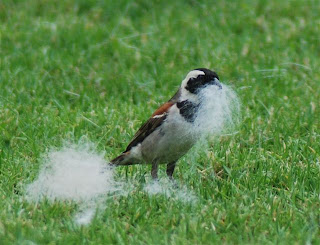 Well it would seem that this year is speeding by on legs like Emu’s! They now have been called Eee, Em and You and have a habit of disappearing, last week into the forest, with alarming speed. (‘and’ has vanished altogether, and so unfortunately, there are now only three birds) We have a new sport called Emu round up which is a great cardio vascular workout definitely not for the faint of heart!

Sticking with the feathered news – a new species has been sighted at Wyndford, now called the ‘Bearded Sparrow”. This little bird can be seen working furiously fetching and carrying, impersonating Santa, whenever Dodge, our Husky has been brushed! Needless to say, all newborns at Wyndford have very warm cosy nests…..

For all those little boys (and girls and Moms) that have been ‘snake hunting’ with Shane, this picture above is for you! A 60cm Puff Adder found in our garden…this time I was quicker on the uptake and went to fetch Shane and left George to watch the snake!

We have started work on repairing the swing bridges on the Little Caledon. It has been amazing to see the force of the water which pulled and bent chemical bolts out of the rock, but we have managed to salvage the cable and wooden slats so progress is being made (albeit a little slow due to the precarious nature of the bridge…and with only one dunking so far – fortunately not George – I have it on good authority that he doesn’t float so well…….!).

After two years of disappointing fruit crops due to late frosts, we have now had the most wonderful season. We are still waiting for the grapes, quinces and pears to ripen, but have had great jam making sessions already. You can be assured, that all jams served at Wyndford are home grown and made and the pantry is full. Wow! Having said that, there are only so many things you can do with apples, apples and apples. They are fairly dripping off the trees, so we (thanks to Josh, our son, who has just spent three weeks at home) are now into cider making. We have a special press– plus a fair amount of male energy – for extracting the juice …. And now have 150litres of gurgling ‘frog’ noises in the garage! We await to see (or maybe that should be taste) the results…

We have had at least three new guests recently who commented that the driving down the driveway is like finding a little oasis. The gardens are indeed lush after all the rain and a wonderful quiet place to sit and read a good book…. or even just to pretend to read! Snoozing allowed.

It is our intention this year to work towards upgrading all the linen in the rooms. We have traditionally had each room with different patterned duvet covers, but the current trend is for white percale – but then most guest houses don’t have creepy crawly walks with mud, bunny yards for the kids, or Milo served in bed early in the morning. The jury is still out, but be assured we are continually trying to make Wyndford a greater place to be.

A reminder for the energetic among you that the Surrender Hill Marathon takes place on the weekend of the 4th – 6th March in the Fouriesburg Clarens area. (Maybe we should enter Eee, Em and You!)

On behalf of the Wyndford Family
Have a great Month ahead.